So I got to doing a little extra reading about population and spent a little time digging up some exemplars that would help with the design. I found a nice reference which made Caras Celairnen bigger. I did some scaling up of the map and discovered that there was a lot more land than even I though. I looked at a river port on the Severn (Chepstow) to get an idea of scaling and layout. All of which has been changing my thinking on where the town might be situated and how it might be laid out.

A note on population

In Other Minds, Thomas Morwinsky provides some excellent extrapolations of population in Middle Earth. This would revise TA1640 Caras Celairnen to a population of around 4,000, equivalent to a large modern village  like modern Overton.  The main population sits within an area of 2.5 square kilometres  (1.5 square miles).

A note on scale

Put in context of the inch to 20miles of the maps produce by ICE for MERP that is a very small area on the map. I scaled up the region and the overlayed a Google map on Overton on to the map.

Caras is  tiny on the map and that river crossing is huge if it was all scaled. Those roads on the Overton map are two cars wide. By scale the bridge would have been half the width of the city, but its a symbol so we can ignore it. So you can really see that there is plenty of space on the drier portion of the spit to place Caras. My initial plan for the town was far too large. Unless I say the bridge is much further to the mouth of the river.The Uialduin river is half a mile across according to this (give or take). A wooden structure is unlikely to survive without constant modification. However, Swarkstone bridge is 17 arches, made of stone and a mile long (with a causeway). If Dwarves built the town then it is entirely possible that such a bridge would exist. 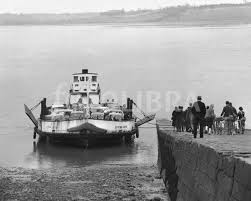 The river Lhun by contrast is nearly two miles wide – similar to the river Severn at the bridges. There was before the bridges a ferry that ran from Aust. A stone jetty providing mooring to cope with the tidal river. Of course no engines, just sail and oars. So perhaps more like the image below of the New Passage ferry further down stream in 1727.

The medival map of Chepstow could be used as a guide to the sort of layout a town like Caras Celairnen might have. Although Chepstow has no marsh land and the river Wye is only 106 yards across, it was a regular river port with tidal trading links around Europe. The extensive field system provides a realistic idea of how the area around the town is used to support the port population. Short docks and jettys on the inside (slow current bend) provide a good example of the structures that might be in use in Caras. in 1306 Chepstow had 308 Burgages (houses rented from the Lord, hence Burgher). Which looking at the 1686 map leaves me wondering where they all are as there appears to only to be 100-200 houses marked. Either way, with a family size of between 5 and 12 that would put the population between 2000 and 3000 strong. Furthermore, I am sure the map makers didn’t include the serf hovels outside the walls.

First things first, this is a fantasy game I don’t have to follow any of the things I see in real life or stick rigidly to the historical facts. Nor do I need to get bogged down in where the town symbol is on the map, or the size of the river scaled up. I just need to stick to the fact that “situated on a rocky spit of dry land at the otherwise swampy junction”. Rocky spit – means the finger sticking out between the two rivers. We are sticking with my original drawing idea and placing it right on the spit. There needs to be a bridge crossing, but it can go where needed to make anchorage sensible. The swampy area can be much bigger than on the map, but there will be some dykes and reclaimed land near the town that will use the levee bank on the Lhun side as the start point. Perhaps a causeway for the bridge road as well. With this I can happily have anchorage up the Uialduin in that nice slow swampy region to the north, especially if the bridge is high enough for small river barges. Indeed, there is nothing to stop a high span if the ground on the otherside starts high enough. Perhaps the reason the Uialduin is not a delta into the Lhun is because it passes through a canyon formed from two hard rock hills.

On where to place Caras Celairnen

What is Caras Celairnen’s purpose

If Caras Celairnen is to be placed on the map, the purpose of the town need to be very clear. If it is purely a ferry port for goods crossing then it can only sit on the Lhun and would link to the bridge over the Uialduin using some sort of causeway road. However, we have established that there is no marked habitation on the opposite side of the river making a ferry unlikely. Goods are more likely to be shipped up and down river using river barges and shallow draft luggers.

This leads us to the conclusion it is definitely a multipurpose port. A hub for goods brought overland and down river and also for those that have come up from the sea (bypassing Mithlond).

Where would ships anchor?

Given that a variety of craft will be using this port a number of anchorages would be needed. If the Lhun is tidal, then so is part of the Uialduin around the mouth of the river. This means that there needs to be sheltered anchorage for some of the ocean going ships with enough draft that they aren’t beached on every tide. This is likely that it would have to be in the middle of the channel of the Lhun. Barges would then transport cargo to shore.So we need barge docks in easy reach of the middle channel of the Lhun. We would also expect barges to wish to use the slower current of the Uialduin for mooring and perhaps some areas of the swamp as dry dock repairs. We can also say there are probably several ferries operating crossings, but that they are unlikely to be permenant routes.

We could divide our triangle between the two rivers into each corner zone. The North East corner is really beyond the bridge and although it is possible it might have a sufficient depth for small ocean going ships the presence of marshes suggests not. In contrast, the North West corner is connected to the North road that follows the Lhun. It fits the bill for ocean ships and if the lower portion of the triangle is also marsh then the flats would provide refuge for the river barges. A causeway road would be needed to take road goods to the bridge across the river Uialduin. The south west corner also offers similar attractions to the North west. With the Uialduin backing up water into a marsh because of the Lhun it would suggest that at the meeting of these two rivers in the lee of this spit anchorage is relatively easily. Barges could stay out of the stronger current when unloading ships (less work) and could still be stored in marsh creeks. The bridge is now the only  conudrum. Is it a true bridgehead – no further navigation by keeled vessels, or is the bridge special. The former can go further upstream with again a causeway road to link tot he town. The latter could span the river in high arches as a miracle of Dwarven construction (just because no-one mentioned it doesn’t mean I can’t build it).