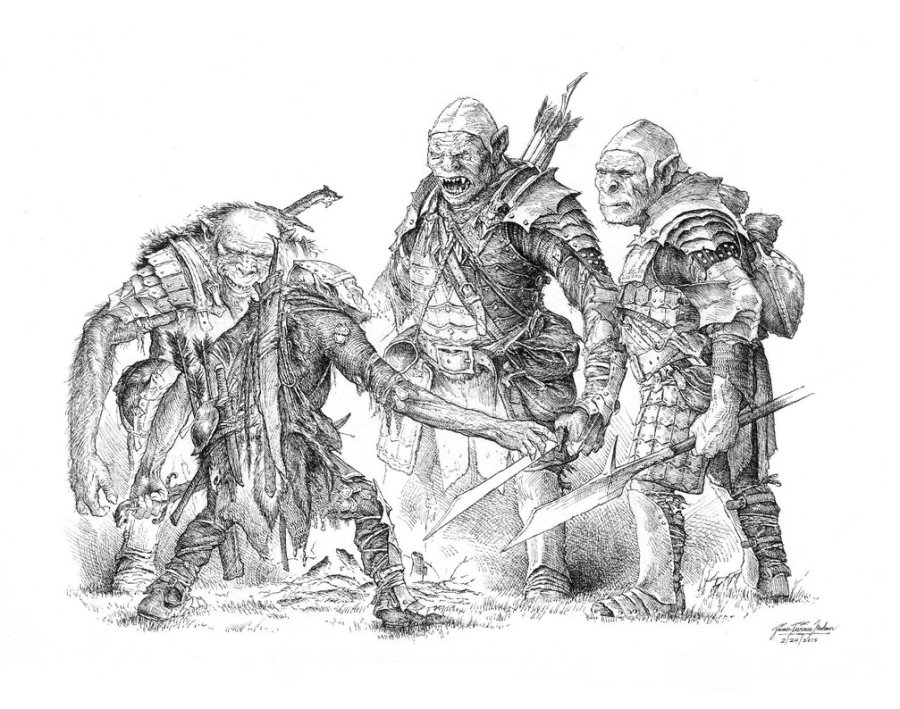 The party spend time planning when and how to ambush a few patrols in the hope of reducing the number of orcs in the war band, They set out to prepare to ambush a patrol using the sunken road. As Billwise has shown himself to be very fleet of foot and stealthy, the party decide to use him as an advanced scout. This proves to be fortunate as he is able to alert the party to a patrol before they encounter it. Hoping to use surprise, the adventurers improvise a hasty plan. The dwarves stand out in the open, to tempt the orcs into rushing them, whilst the others hide using the ample forest cover. This proves a disaster with the ambush discovered before the trap could be sprung. Fortunately, the dwarves mighty war-hammers inflict punishing damage and soon the small patrol of orcs is dispatched.

While the party hide the bodies, Billwise scouts towards the sunken road and discovers a lack of patrols. He reports this back to the others and Denig suggests that this is because it was a bright day and patrols might be less frequent. He goes on to suggest that they use the time to scout the camp with more detail as he thinks that the Orcs will be less alert at this time of day.

So it is that, with the rest of the party nearby, Billwise stealthily approaches the ruined manor. He finds no sentries and after a quick survey reports back to the others. Who, after a discussion, decide that Billwise should sneak in and kill any sleeping orcs that might be inside. To aid him Ydal casts a Prayer of Quiet on the young hobbit, allowing him to go about his deadly business without a sound being heard.

All goes well as Billwise slips into the darkened building, enveloped in silence he attempts to dispatch the first of the sleeping forms, but killing is a messy business and if you are a hobbit it becomes more difficult when the first blow is not a killing one. Although willing, it becomes clear that Billwise lacks the skill for a quick kill but with a brief struggle he dispatches his first foe aided by the blessing of silence. He swiftly moves on to the next sleeping orc and again struggles for a quick kill. This time the struggle allows the orc to escape outside the bubble of silence that surrounds Billwise. The cry alerts the other occupants of the ruined building and also his waiting companions.

Hearing the cry, everyone, except Denig, rushes into the building to assist Billwise. Ydal rushes to aid Billwise and Pick rushes to prevent an orc Shaman from entering from another room. Dagaard guards the door ready to assist Denig who keeps watch for guards from the main camp below. Suddenly, beside Billwise, the corpse of dead orc drags itself upright, clumsily gripping its scimitar, still congealing blood oozing from it wounds. Dagaard quickly rushes in to protect the vulnerable hobbit’s flank. A second shaman has joined the battle and his invocations look set to make a quick battle last longer than expected reanimating the dead. Fortunately, the undead orc and his more live companion are dispatched and the first shaman (an apprentice) at the door looks set to be pressed by weight of numbers.

Outside, Denig, seeing no immediate threat from sentries, prepares the ritual of golden slumber and makes his way into the ruins. In the ruins, the shaman invokes a spirit of calm over the party and they are unable to undertake any aggressive act. The two shaman make for the exit only to meet Denig coming the other way. Denig releases his prayer but the apprentice resists and slashes at Denig’s stone skin with his scimitar. Denig holds the door whilst his companions try to figure away to aid Denig. Meanwhile the shaman, continues to build invocations against Denig, despite Billwise’s attempt to use the area of silence around him to prevent the prayers. Denig resists each attempt to unleash Dark Forces on him and battles the apprentice. Ydal throws up a wall of silence around the room to prevent the camp from hearing the sounds of fighting and blesses Denig to aid him in his lone stand.

Ingeniously, Denig calls on his tribal gods for a bolt of lightning to strike his opponent, but all that is granted is a mild electric shock. The shaman continues to lash out at the stone man with dark energies. Alone and with no help Denig it looks like all is lost. However, thanks to the doorway and his stone skin he defeats both the apprentice and the Shaman.

During this time, unable to act aggressively the rest of the party take on different tasks. Dagaard and Billwise investigate a barred door way from which whimpering is coming. Pick investigates the room the Shaman and apprentice came from rooting around for treasure. In the barricaded room, Billwise and Dagaard discover that the source of whimpering is a small child, no doubt saved as a tasty morsel. Billwise, not much larger than the child, reassures the traumatised soul.

Meanwhile, Pick discovers some treasure including bags with runes of screaming. Which he sets off. Unfortunately, he is outside the quietened room and the noise is heard by the sentries in the camp below, a fact made apparent by the sudden sounds of disturbed orcs from the camp below. The party flee carrying the child, but not before a note written in Elvish with a distinct hand and ink is recovered from the shaman along with his staff. They struggle to move quickly through the woods but the sunlight appears to be on their side and there is no sign of pursuit although a hideous din is heard from the camp.

Back at the Periwott smial, the party assess their options. Fearing that their trail may be followed, Denig attempts to cover the trail and lay false route, while Billwise scouts for potential pursuit, of which he sees no sign.

Back at the smial, the child is reunited with her mother amidst many tears. The night passes without incident. In the morning, the party decide to investigate the effect of their recent raid and find lack of patrols. Curious, they return to camp with Billwise as scout and discover some dead orcs who were not killed by them. Most of the party are confused by this and fear some new opponent able to slaughter orcs at will. However, Denig tells party that it is because the war band were leaderless and turned of each other to decide leadership. He goes on to tell them that eventually a leader was decided and they have either left or gone on to do what ever it was they were here for. Denig thinks that this is the the former as the orcs are far from the usual places they would normally inhabit.

Neffin wood, now free of orcs, is home again to the Periwott hobbits, who offer sanctuary to the rescued prisoners. The rescued villagers work with the hobbits to gather food and a new community is founded. During this time our heroes rest and recover and discuss the next steps. Although the hobbits can supply a few simple supplies it is clear that the adventurers will need to re-provision with gear suitable for adventuring. Pick, Dagaard and Billwise are all keen to find Jeremiah who they left with the cart and the plundered loot from the ruins of Elvellon manor. They also invite Ydal and Denig to join them as they believe that they could be helpful in any other explorations that are given to them by Mithparvandir.

A staff x2 PP multiplier, a note with a distinct style of writing and ink.
The gratitude of the Periwotts and local villagers mean that should they need somewhere to stay the characters will always be welcome. Local tales will always be told of how the heroes took on a much larger force and vanquished them saving the woods.