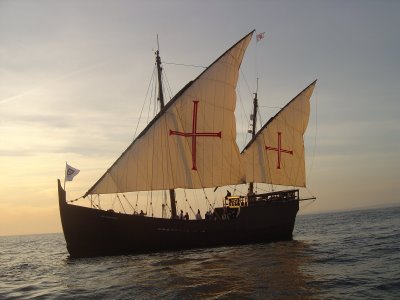 The journey south through the thick jungle to the lighthouse is punctuated only by the odd sighting of wild life. Aerandir and Denig are too slow with their bows when a small deer is fleetingly sighted. However, later in the day, Aerandir is more successful with a shot at a peccary disturbed by their passage. The small pig felled by the arrow is soon dispatched by Alquatris with his improvised spear and the group pause to butcher the animal before moving on.

Eventually, the party emerge from the jungle onto the coastal plain. The lighthouse in sight, Alquatris bids the party farewell; fearing his presence may aggravate Nasik. But he bids them join him at his camp around the bay, with a warning to not to tarry too long for night falls quickly on the island.

The four adventurers approach the lighthouse but find no-one at home and so settle down to wait for the return of Nasik. It is not long before the occupant returns. Distracted, he barely notices the unusual group before he reaches the main door where they wait. His wild hair floats like a halo around his wrinkled features and he is soon engaged in a prattling discourse on the bird life of the island. Throughout the almost ceaseless monologue Fulton and the others try to discover what he knows about the light at the centre of the island, which seems to be very little. During his monologue he tells the party that there are warnings not to take its treasures, by which he seems to think the birds.

Remembering Alquatris’s warning the party set off with plenty of time around the bay and arrive at the sailors camp round the bay. A small stream runs onto a beach where a makeshift hut stands near to a campfire. Soon they are feasting on the roasted pig meat and discussing plans for the next day. The central peak is still of interest but the explorers feel that a smaller western peak might provide a vantage point that will help with their exploration.

The next day, the party with Alquatris in tow, he is desperate to leave the island and would rather travel with them than miss his ticket off the island. They follow the small stream towards the western peak. At the foot of the peak they discover an abandoned mine. which peeks Dagaard’s curiosity. However, the entrance of the mine makes the party feel uncomfortable, especially Fulton. Seeking divine wisdom, Denig casts around the entrance for any sign of evil, but finds none. Assured, they turn their attention to the western peak. Unlike the main peak that rises slowly to a final steep climb, the western peak rises sharply out of the surrounding jungle. A few hardy trees and plants cling stubbornly to the barren rock face. Lacking an easy way to gain a view of the main peak, Fulton climbs a nearby tree and is rewarded with a better view of the land. They decide to hike across the saddle of the island, through the jungle to the main peak and expend their climbing efforts there.

The day though is passing and the thought of camping in the jungle when there is the potential of a shelter in the entrance to the mine is too much of a draw. Besides, Dagaard is still keen to explore into the depths of the mine to see what treasure lie within. The rest of the party agree, if only to make sure there is nothing that will attack them in the night.

The gloom of the upper workings of the mine are quickly explored. Dagaard is unable to see what it was that was once mined here but a ladder to a lower level suggests that perhaps the upper level was worked out. Although the ladder looks sturdy, Denig is dubious about it holding his weight. So it is that Dagaard makes the first foray down and discovering a network of tunnels below is joined quickly by Aerandir and Fulton.

The light from Dagaard’s miners helmet and Aerandir’s lantern flickers of rough hewn walls as the trio begins to explore one of the side tunnels. Echoes of their movements and whispers bounce back eerily from the darkness. Perhaps it is a sixth sense or a movement in the air that alerts Aerandir’s Elven senses but he turns in time to raise his scimitar and step to one side in an act of self preservation from an onrushing ethereal miner. In doing so he exposes Fulton to the onrushing phantom who is fortunate to be able to raise his cutlass at the cry of the half-elf. The ghost passes through both Fulton and Dagaard, whose weapons pass through with no effect, physically knocking them backwards as it passes through them howling about its treasure.

Within moments, a second phantom miner approaches from behind Aerandir, who again is fortunate to be aware of its approach. He again leaps into the junction of the passage in an attempt to avoid its touch but is not so fortunate as it passes through him and in the act knocks his shield from his arm. In the ensuing mayhem of ghostly miners and recovering the lost shield the trio make their escape towards the ladder. Their progress is not without peril as ghosts appear down corridors blocking their exit. Bravely, they rush through the ghosts shrugging off the discomfort of every encounter. Unfortunately, as he approaches the ladder, Fulton’s shield is knocked from his arm but he chooses to race to safety rather than recover it.

Soon, the party has regathered on the upper workings deeply regretting their encounter with the spirits of the dead miners. All three feel a depletion of vitality by the presence of the ghosts, a feeling not relieved by the prayers of Denig. Dagaard, mildly protests that they should try again, for the ghosts had spoken of treasure, but even his desire for wealth has been muted and he accepts Denig’s assertion that only magical elven weapons will aid them in dispatching these spirits to Arawn’s halls. Morosely, the party withdraw to the jungle outside the mines to set up camp away from the mine.