The Innkeeper laughs heartily from behind the bar his braided golden hair gently flowing in waves as if guiding the golden mead into the glass before him. His blue eyes appear ready to break into song. Hrothgar is not a tall man among his kindred but is broader than most and his physique implies that removing the odd drunk from the inn would be a trifling task.

Hrothgar was raised in Elvenbyen further north on the Lhun. In his youth he wandered the wilderness as a trapper and occasional woodsman. However, he soon realised he preferred to play host to weary travellers than be one. Having married his wife Hilda, he cashed in his bounty and they both moved to Caras Celairnen to buy and run the Captain’s Daughter.

From the doorway a small whirlwind of energy bustled into the room, deposited a tray of food before the customers and left in a flurry of rosy cheeks and cheery platitudes. Her blue dress was as if the sky had entered the room and her smile made the occupants feel as if the sun had followed it. Pale blue eyes reminded the watchers of a winter’s sky and her skin was the winter snow.  With kind words of hospitality Hilda moved through the room until, with a calm word to her husband, she leaves. Once more the room becomes a little bit dimmer and smaller.

Hilda runs most of the housekeeping side of the business, including importing the honeycombs needed for creating the famed mead sold here. However, don’t be fooled by the appearance of a domestic goddess, she is fully aware and participates in Hrothgar’s under the counter trades.  Indeed, her family connections with Elvenbyen allow for the transport of goods avoiding some of the more normal routes.

With a glittering smile, she gives the young man one last lingering look before disappearing into the inn, hips swinging and long golden hair swaying like a field of corn in a summer breeze. The young man lingers wondering whether if he stays he will get one last glimpse of those blue, summer sky eyes. Reluctantly, he turns and drifts off to accomplish whatever quest she has sent this young knight on.

Beautiful, charming and devastating, Freawaru, or Frea to her family, appears to be the perfect model child. Yet all is not as it seems, Freawaru has discovered early in her life (13 years old) that a winning smile and a lingering look can make men, well boys, provide all sorts of things. Already she has a small network of footpads and burglars, mostly friends of her brother, who are willing to acquire small trinkets for her.

In the dark shade, the young man slouched against the end-wall of the row of houses, his pale, pock-marked skin gives the impression of vampire. His watery, blue eyes  nervously glance from shadow to shadow as if allergic to the light. A voice calls from the inn and Hroðmund sighs heavily. Shaking hands with a dark shadow which sits with him in the shade he slouches across the sunlit yard towards his chores.

Adolescence has not been kind to Hroðmund, his skin and attitude have both taken a turn for the worse. Already he has gained a reputation for trouble, despite the fact that he has done little wrong except be ungraceful in completing chores and hang around in the less obvious alleys of the district. Hrothgar feels that his son will come round and just needs some time to grow up. As such he is keeping him on a short rein and is hoping that he can send him to live with relatives up in Elvenbyen to help the process. 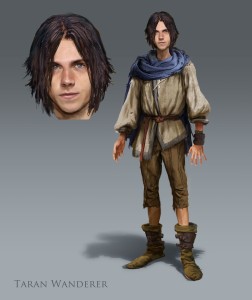 The lanky youth perched on a barrel in the sunshine of the shore, his hat shaded quick eyes which watched the hustle and bustle of the dock. Smoothly, he glided into the anonymity of the  crowd. Some minutes later a rich merchant exclaims in surprise at a missing ring from his finger and a crowd gathers round to help him search the mud for the lost trinket. From up the hill by the Shore gate the Unferth turns to see the commotion down on the shore. He smiles quickly in amusement as he place a ring upon his finger.

Hroðmund’s best friend Unferth lives close by to the Captain’s Daughter. Outwardly polite and well dressed many hope he will be a good influence upon Hrothgar and Hilda’s son. But Unferth is bewitched by Freawaru who has harnessed his light fingers in adding to her collection.

A sickening crunch, an inhuman scream, panic set in on the dockside. Soon the kegs have been moved from the unfortunate. A burly, dark haired man kneels down beside the injured docker, his eyes scan the damaged limb. Quickly, he gives the patient a sip from a flask he carries on his hip, and watches until the man’s eyes glaze. With soft, deft hands he works quickly cleaning the wound site, setting broken bone and binding the wounded legs. Soon he has finished and fellow dockers have made a make-shift stretcher to carry the invalid to the hospice. Eclef returns his spare bandages to the satchel he always carries with him, accepting the thanks of his fellow dockworkers with good grace.

Eclef is a good friend on Hrothgar’s; they both met in Caras when Hrothgar first took possession of the Captain’s Daughter. In the local community, Eclef is held in some regard, this is because of his skill as a healer. His mother was a member of the Sisters of Nienna and so from her he has learnt many of the healing arts. After the opening up of the passages to the Underdeeps Eclef supplements his income as a docker by selling first aid kits and providing healing services to those who have met with “accidents” below ground.